Voting Is Not Enough

As I type this the U.S. is one week away from the 2008 Presidential election. Seven days left until voters theoretically (remember the electoral college really chooses that office, unfortunately) decide who will lead the country for the next four or so years. Unlike the last two elections there appear to be some more than surface level differences between the two major party candidates. However, the three third party candidates (Bob Barr (L), Ralph Nader (I), and Cynthia McKinney (Green)) are still considered obscure, not allowed into the debates or to get their platforms heard by the voters. Between that, voter suppression efforts by the GOP, and the increasing polarization of this country, its getting more difficult to get your voice heard much less come to a consensus on its future.

I admit I have a problem with the concept of how voting is done in this country. I also admit that I vote whenever I possibly can (though the more anarchist leanings in me feels bad about doing it). Before I get any angry responses, let me say first that I have absolutely no issue with as many people voting in an election as possible. In fact I think more people should vote (though I respect people's right not to). However, too often in America democracy has been reduced to casting a vote once every two to four years and then doing nothing while other people make decisions regarding the forces that control our lives. That is a problem.

Because of this fact, too often it seems that politicians take advantage of inactivity and push through things that counter how a democracy should go. The last eight years are an obvious day-glo example of this (especially Dubya's overuse of signing statements when signing bills into law). Whether it's getting our country into unpopular (and unnecessary) wars, slowly cutting off a woman's right to reproductive freedom and reproductive justice, or the seemingly slow creep towards martial law via mandatory minimum sentences and the like, it seems America tends to lose its way regardless of who gets into office.

Now I understand that most Americans are extremely busy. Between having to work (often multiple) jobs, trying to keep their families alive, and just make ends meet it can be hard to keep up on what's going on around you. In that context it's easy to see how people can fall into this cycle. But under this cycle nothing seems to change. If we are to survive than things must change in how things work out.

Voting alone is not enough. We all have to do what we can to hold the politicians' asses to the fire and make sure things change course. This means everything from writing (or e-mailing) Congresspeople to making what vigils and demonstrations you can make and everything else along the way. It's not always pretty and it's definitely not glamorous but those things have to be done. I'm aware that it can seem like an uphill struggle at times and keeping up with current events can seem daunting. It still has to be done if we are to become as a culture what we were taught America should be - or to become something better than that.

About a year ago I saw Noam Chomsky on CSPAN and he was asked about whether protests and raising awareness of issues to force change worked or not. His response was surprising when he said, "It's the only thing that ever has." He went on to explain that change can happen though it sometimes doesn't happen as fast as we'd like. While ti may seem like running into a brick wall at times, Chomsky makes a valid point: it's up to us to bring change about.

It's easy to think that if we just elect the right person then things will automatically change and the problems of previous administrations will go away. Unfortunately it doesn't work that way. Thus, it's up to me and you to make the world a better place. We can't do it all alone but for better or worse we're the only people who can do it.

I know some people reading this may disagree with what I say and where I'm coming from on politics and issues. That's okay - they have to right to do that. Just like we have the right to disagree with the shambles they've made of our world slowly over the previous decades and at warp speed over the past eight years.

We alone can work to make things right. We're the only ones who can do it.
Posted by Boone at 6:08 PM No comments:

Hey! Hope your weekend is going well. It's been a while since I posted on the blog so there are a few things that I've been needing to post here.

First some quasi good news. In mid September St. Paul,MN police dropped charges against Democracy Now journalists arrested covering protests of the RNC convention. Unfortunately it's uncertain whether there wil be an investigation and there have been some reports that in both Denver and St. Paul the cities asked for insurance coverage in order to hold the conventions. GIven all the hoopla about the upcoming election, this has gained little coverage.

Elsewhere, crowd response at the McCain/Palin rallies have taken a very scary, ugly, and even racist turn as we near the election. At a time when conservatives have harped about how racism doesn't exist when it suits them, this tells a different story. Between this and the use of Obama's middle name, desperation is setting in for the GOP.

Also, if John McCain claims former Weather Underground leader BIll Ayres is all washed up and he doesn't care about him, why does he keep bringing Ayres up?

That's it for now. Stay tuned for another post in the hopefully very near future.
Posted by Boone at 4:13 PM 1 comment:

Yes it's only 22 days until the election. I know it seems like the campaigns have gone on forever but it's only been finalized for a little over a month. For most people the choice is between Obama and McCain (despite there being five candidates for president if one factors in Bob Barr (L), Ralph Nader (I), and Cynthia McKinney (Green)). The debate is Wednesday and if the performance of the last two is any indication, McCain's in for a rough ride. As for Obama, aside from the fact he should be thanking the memory of Shirley Chisholm's 1972 campaign on a daily basis, seems to be in the lead. However, given the GOP theft of the last two Presidential elections, I have to say anything is possible - and that's truly a scary thought.

What is needed on a national level is adopting the Instant Runoff Voting (advocated by the Green party and used in several other countries) which would allow for people to vote the first choice as well as several others for each post. Yes the vote counts would take longer, but I think more people might go to the polls if they knew they could vote their conscience. As for those in the two sides of the one party system current in charge, you'd still benefit since your candidates would be many of the third party candidates' second or third choice. Sadly, November 4th won't have this so people will still be fretting over who they vote for.

So what's ahead? In the past I'd have an idea from looking at the polls. However, things have been so topsy turvy the last couple of election cycles that it can't be known until November 5th - if then. Here's hoping the change is for the better.
Posted by Boone at 6:34 PM No comments: 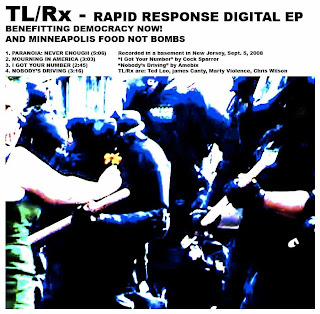 NOTE; I normally don't use the blog to do CD reviews. However, given the timeliness of this release, I felt it would be good to make an exception.

Many people in this country were shocked an appalled by the police response to protestors during the Republican convention in St. Paul back in August, especially the arrest and attacks by police on journalists. Upon learning of what was going down, Ted Leo and the Pharmacists decided to respond - producing this EP in the process. The first two songs are original tracks written for this release kicking off with the rousing rocker "Paranoia's Never Enough" detailing the police repression in St. Paul. "Mourning in America," the other original song, addresses the ugly specter of racism as an election issue. Rounding this off is a cover of Cocksparrer's "I Got your Number" and a version of Amebix' "Nobody's Driving" performed solo with Ted's own take on the HC/proto grind anthem.

Recorded and released quickly, the sound quality is a little rough. However, it is fitting given the circumstances around us that this download isn't the most slickly produced (it's more punk if it isn't). Only available from T&G, thew proceeds benefit tow organizations worthy of support: Food Not Bombs and Democracy Now.

Get it at touchandgo
Posted by Boone at 5:25 PM No comments:

Okay, it's been about a week since the first debate. McCain did show up, but seemed more interested in pushing his agenda than offering any solutions. Obama was able to counter but did on occasion appear to not be as tough as he should've been. While each side claimed they won, the polls (in some effect driven by the economy) seemed to favor Obama. Since they were the only candidates one can only guess whether the results would've been the same if Nader, McKinney, and/or Barr were allowed into the debate (which I would've loved to have seen by the way).

The VP Debate with Biden and Palin is tomorrow night. While on the surface things seem like an easy outcome to predict, this election cycle has shown that nothing should be assumed. THus hot things will turn out is anybody's guess.
Posted by Boone at 2:33 PM No comments:

Boone
This is the blog of Boone, founder of the underground music and sociopolitical fanzine, "The Trouble With Normal." Started in 1992 in Columbia, MO, TTWN has become the longest running zine in the area.